Someone on Tumblr sent me a life playlist! So cool. 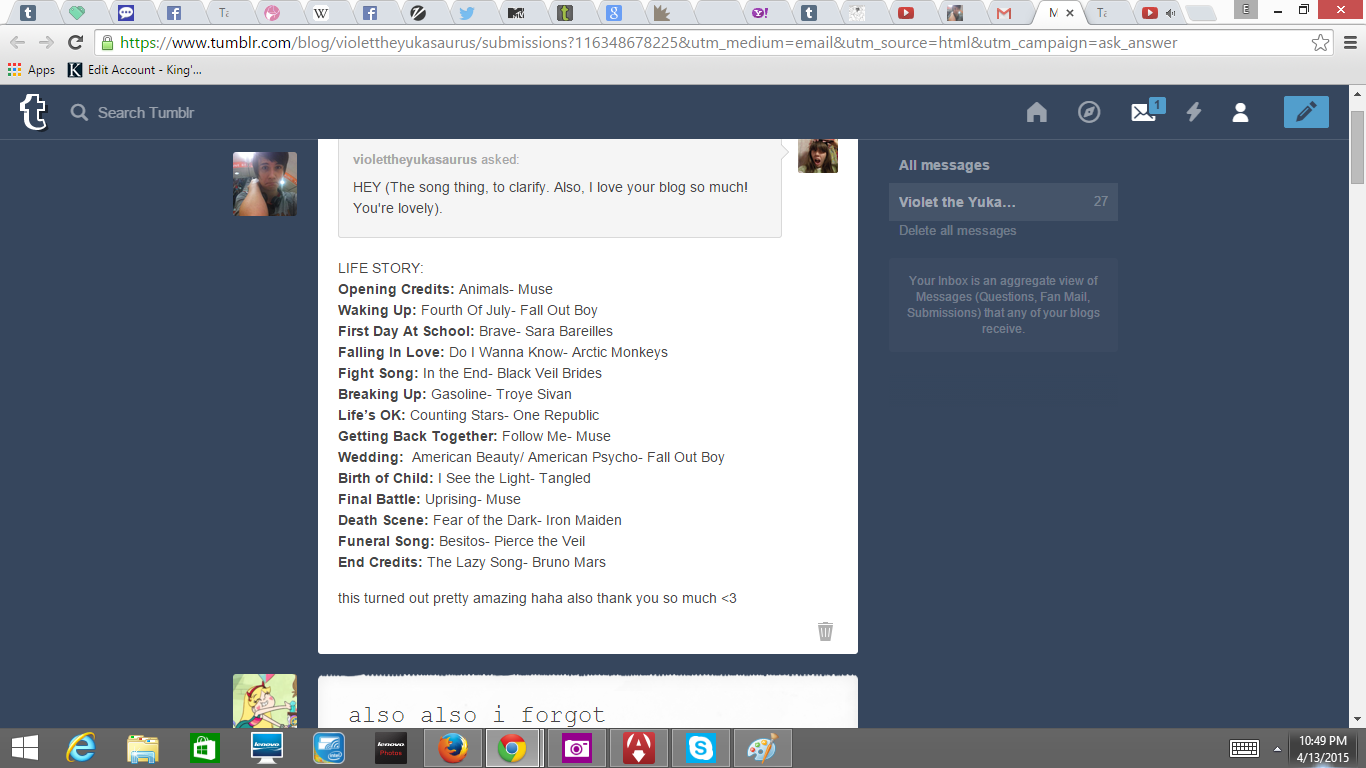 Deep breath.
In, out, in, out.
I am having a moment of panic. PANIC.
I DON'T KNOW WHAT I WANT TO DO WITH MYSELF AND IT IS MAJORLY FREAKING ME OUT.
I'm on these "accepted student" boards for the schools that I got into, and they're all full of ambitious, intelligent, articulate students who are committing to schools and sure of their decisions, whereas I'm more in the realm of "if you have to choose a school and it's making you rethink your life and pushing you into a major existential crisis clap your hands," which isn't really a great place to be. All of these people are incisive and decided, whereas I'm a noncommittal, wiggly hand gesture paired with a vague "ehhh" sound. Which is stressful and intimidating to me.
And Minerva. MINERVA. Like, WHAT DO I EVEN DO ABOUT THAT? IT'S FANCY? IT'S NEW? Shouldn't I want to take a risk, to do new things, to be a part of history? If I don't join Minerva, will I regret it for the rest of my life? Will these people go on to conquer the world, while I wait at the sidelines? And...is waiting at the sidelines even such a bad thing? Minerva seems like an intentional community, which I love. But it also seems sketchy as ever, and I'm kind of skeptical on their whole "new twist" on education. I just don't know if it's a good idea. And I'm scared, because I don't know what I want to choose, or how to make the right decision. But...I don't need to be. Everything is going to be all right. I will make a good decision. And this seemingly momentous choice, this huge decision: it's making me reconsider what I value in life, what I want for my future. It's forcing me to delve into myself and to analyze what I find. And this kind of hurts. It's kind of overwhelming. But I think that it's really, really good. Good will come of this. For now, it makes my head hurt, and my heart ache, and every part of me scream, "STOP OVER-THINKING THIS" one second, and "WHY AREN'T YOU THINKING THIS THROUGH MORE DEEPLY?" the next. But I am learning more about myself than I ever would have without these choices, and what I am learning will help me in the future
..................................................
Me: I bought us matching My So-Called Life buttons on Etsy last night!
Mom: *Laughs hysterically* You're such a NERD.
Well...I kind of am.
UPDATE: They came, and they're amazing. Who's laughing now?
...Still her. I'm still a nerd.
........................................
JC: "What's your favorite animal? Other than baby humans."
...I do love baby humans.
........................................
I took The Colour Quiz, and my results are scarily accurate. Like, not all of them are perfect, but daaang:

"Creative and emotional, looking for ways to further expand those qualities. Looking for a partner who enjoys the same activities. Seeking adventure and new and unusual activities."

"Needs to meet people who have the same high principals and values as himself, but finds the need unfulfilled. her need to feel dominate and superior leaves her feeling isolated and does not allow for her to give freely of himself. she would like to surrender and let go, but sees that as a weakness she must not give in to. Holding back will allow her to stand out for the crowd and earn a higher status, recognized by others as unique and important."

Current events leave her feeling forced into compromise in order to avoid being cut off from affection or future cooperation.
Has strong emotional demands and is picky when it comes to choosing a partner. she chooses to remain emotionally distant and uninvolved in relationships.
Giving more than she is getting back and feels misunderstood and unappreciated. Feels she is being forced into compromising and even her close relationships leave her feeling emotional distant.
Is feeling emotionally drained from stressful and tense situations. she is in need of peace and quiet in order to overcome her lack of energy and may become irritable if she does not recover.

Your Desired Objective
"Wants interesting and exciting things to happen in her life. she is able to make others like her, because of her genuine concern for them. she is charming and open and makes friends easily. she can have an over-active imagination, which leads her to fantasize and daydream." 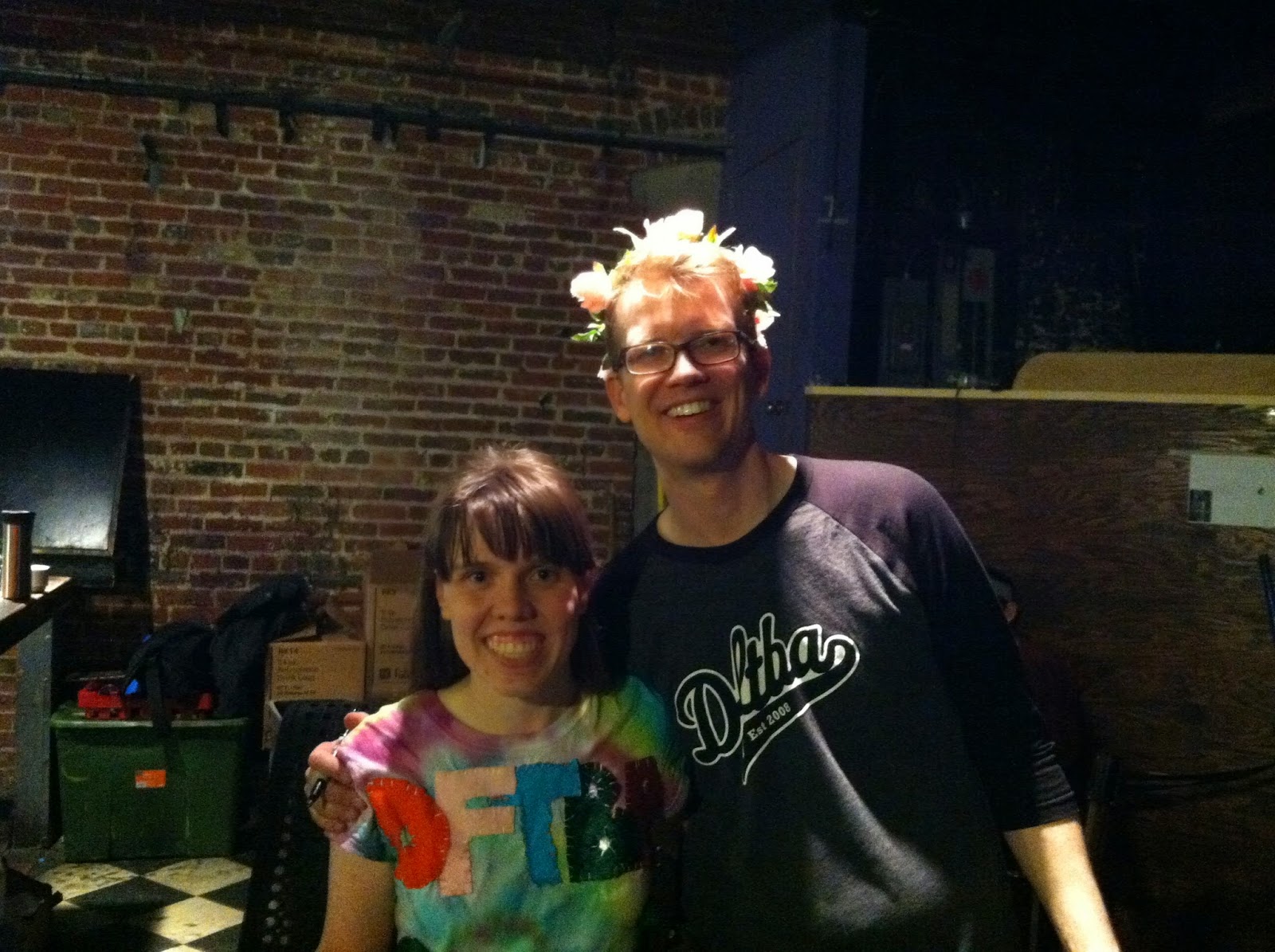 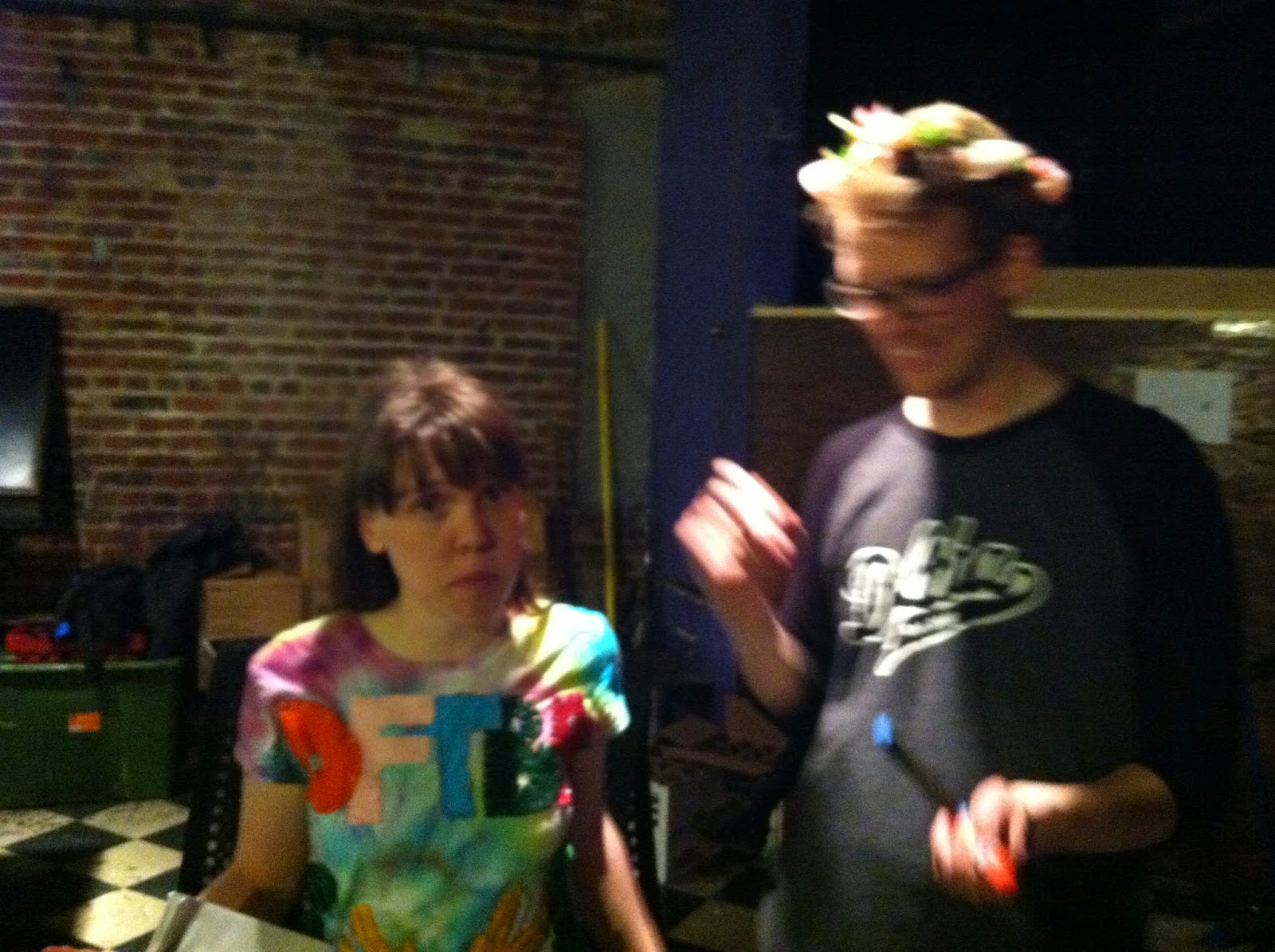 Sweet outtake. He's holding the makers that I gave him, so that's cool.

I met edwardspoonhands yesterday, after his concert in DC, and I’m kind of still in awe. He is amazingly gracious, kind, and friendly (and stayed at the venue long after the concert to talk to all of the nerdfighters there, because he’s the coolest person ever).
There’s something amazing and humbling about meeting someone who has changed your life in the way that Hank Green has changed mine. It’s kind of interesting, this sense that they have had such an impact on you, that you have this one-sided history together of which only you are truly aware, and it makes it difficult to know exactly what to say in that moment. I, for one, said “thank you so much” at least twelve times, because I am inexpressibly grateful to Hank; Thank you, Hank Green, for existing, for making music and videos and conventions and so many other awesome things, and for sharing them with all of us. Thanks for creating such a cool community in nerdfighteria (through which I have met many of my favourite people), and for organizing events where we can come together and be surrounded by others who share our general love of nerdiness. Thanks for caring about us, and for never forgetting to be awesome. You fill my life, and the lives of many other nerdfighters, with tons of awesome.
(Also, yes, Hank is rocking a flower crown. I gave it to him, and he instantly placed it on his head and was totally down with it, because, as we’ve established, he’s kind of the coolest).
PS: I met, and gave a flower crown to, the Katherine, too (or to a random woman who looks exceptionally similar to the Katherine), I hope she likes it! She was very friendly and super nice.
*******
I'm just so content right now. It was honestly so amazing.
..........................................................
UPDATE: WHEEZYWAITER POSTED A PICTURE IN WHICH HE IS WEARING THE FLOWERCROWN THAT I MADE FOR THE KATHERINE THIS IS NOT A DRILL
And someone reblogged it and commented:
Hey. I saw the lovely lady who gave you that coronet last night. She was very nice.
Well, thank you! You just made my day, random person.